NFC, short-range wireless communication, is a wireless technology initiated by NXP and jointly promoted by famous manufacturers such as Nokia and Sony. It combines inductive card reader, inductive card and peer-to-peer function on a single chip. Identify and exchange data with compatible devices over short distances.

NFC has the characteristics of two-way connection and identification, working in the frequency range of 13.56MHz, and the working distance is close to 10 cm. NFC technology promotes standardization under the ISO18092, ECMA 340 and ETSITS 102 190 frameworks, and is also compatible with the widely used ISO 14443 Type-A, B and Felica standard contactless smart cards.

Compliant with the latest NFC specifications developed by the European Telecommunications Standards Institute (ETSI), the PN544 provides mobile phone manufacturers and telecom operators with a fully compatible platform for the next generation of NFC devices and services: the PN544 is fully compatible with all available single-line Protocol (SWP) The NFC specification for the SIM card and Host Controller Interface (HCI).

The PN65O is the PN544 plus NXP's SmartMX security module. The PN544 and PN65O hardware PINs are fully compatible with the PIN. At the same time, the PN65O / PN544 also offers a variety of host interface options to ensure that handset manufacturers can easily integrate High Speed â€‹â€‹UART, SPI, I2C, and support a variety of RF interface protocols: ISO14443A/B, ISO15693, MIFARE, Felica. In addition, NXP Work closely with leading SIM card manufacturers such as Gemalto, Oberthur Technologies and Giesecke & Devrient to ensure interoperability of SWP interfaces including MIFARE technology.

Figure 1 below shows the block diagram of the NFC PN544/PN65O. 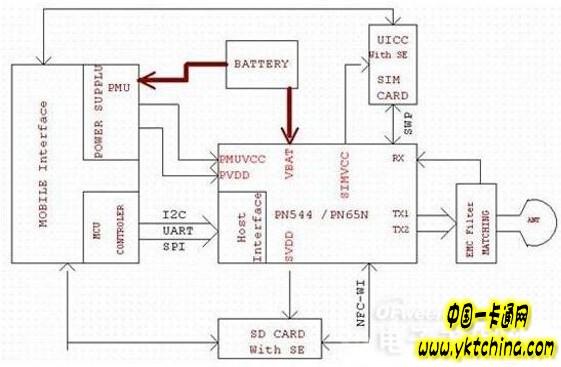 The NFC e-wallet function is based on the mobile phone as a trading platform. The PN544 NFC controller (the PN65O has a built-in security module) and the security module implement mobile payment and data exchange functions.

Since the system is based on an operating frequency of 13.56 MHz. This frequency is generated by a quartz crystal. At the same time, high-order harmonics are generated. In order to comply with the internal electromagnetic compatibility rules, higher-order harmonics of three, five, and five times of 13.56 MHz must be appropriately suppressed. Therefore, the EMC circuit is configured as an LC low-pass filter for filtering out higher harmonics.

Since the antenna coil itself is a low-impedance device, in order to maximize the transfer of energy from the NFC IC to the antenna, a matching circuit must be added between the antenna and the NFC IC. Eliminate the energy loss caused by signal reflection caused by mismatch.

It consists of R127, C118, R128, C119. The Vmid potential generated inside the chip is used as the input potential of the RX pin. To reduce the disturbance, the capacitor should be used to ground Vmid. The bias voltage of Vmid can increase the voltage drive of the Rx pin. Figure 2 shows the NFC RF receiver circuit. 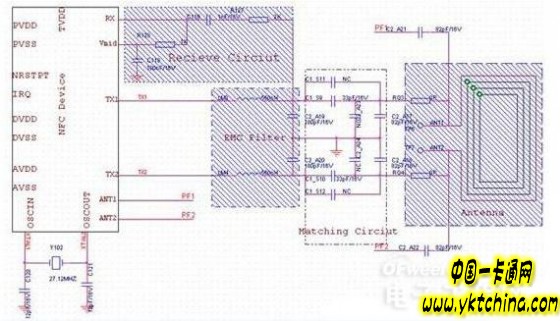